This type of tray was manufactured by a company named "X Chair Patents Co.",based in Hayes, Middlesex. A comprehensive range of outdoor folding furniture was their niche market, all of which formed an X in their mode of operation. They ranged from the well known deck-chair to military beds and portable washbowls for senior officers. They all shared the same functional mode of wooden frames, rivetted to permit folding for transport and storage. Products were made in a variety of woods, from soft woods such as beech to more exotic sycamore and mahogany, which were used for the high quality trays.

The table trays were made in various woods and styles from utility models (no glued joints or rounded edges) up to mahogany and sycamore. The most popular version was made in beech with high quality cellulose finish and optional aquatic stencils on the tray surface. 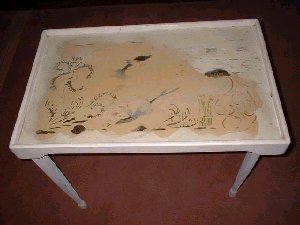 The model in the photograph above was assembled by my father after being sprayed by a young girl, who later became my mother. The table was purchased as a staff sale as a birthday present for my grandmother in 1938. The war started in the following year and my father joined the R.A.F. with my mother working in the munitions factory. All contact with the table factory was then lost. 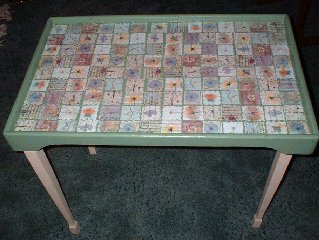 One of my favourite past-times is doing up old pieces of junk and my mother had often asked me to renovate the Silverdale table that formed part of my life at home. To me, that would have been sacrilege. How could I paint something my parents had made so many years ago- so I refused to do it. A couple of years ago I was browsing around a car boot sale and was amazed to see, for the first time ever, another Silverdale table.

This one had no stencilling and I cannot even remember what I paid for it, probably three or four pounds. I kept my bargain buy a secret and worked on it in my spare time (spare time before computers took over). After rubbing it down I applied two coats of silk paint in a sage green colour. For the top of the table I bought a few sheets of good quality wrapping paper with a postage stamp/flower design. Meticulously I cut out each stamp (yes, I did regret it once I'd started) and using a watered down solution of PVA glue stuck them to the table leaving minute spaces between the stamps to enable the base green paint to show through. When dry, I applied a few coats of matt varnish.

The finished table was given to my father as a birthday surprise. My mother was thrilled to bits and immediately ordered the original table to be put in the garage! Of course I saved it and now have it in my lounge- after all it's part of my family history.